The Gobi Desert, the history, the adventures, camping, unique gastronomy, great outdoor and festivals are the highlights of Mongolia. What is your travel destination ? 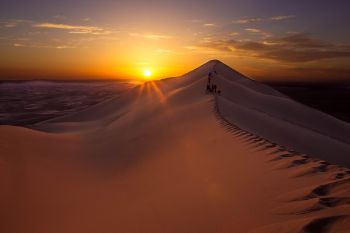 Mongolia bordered by China and Russia is a vast nation that is famous for its rugged terrains and culture inspired by nomads. Known as the land of blue skies, its topography varies widely.  Mongolia has many travel destinations and attractions. There are open grasslands located in Central Mongolia and as you head towards the south there is Gobi desert. In the West are the Altai Mountains and the North is decorated by the Taiga forest. Visit Mongolia, that is the least densely populated country in the world, any season around the year and you won’t regret it. Explore its mesmerizing destinations that render a look into different cultures existing in the country.

There is truly something magical about the sprawling lands of Mongolia, Gobi desert tour. From soaring white granite formations, to rolling velvet smooth sand dunes, the Mongolian landscape is a patchwork of mind blowing natural beauty.

Central Mongolia was the heart of the Great Mongol Empire. The vast grasslands of Central Mongolia is where the first official capital, Karakorum, was founded in the 13th century. This place was home to ancient people who engraved rocks and deer stones to document their lifestyle.

North Mongolia has attracted the hearts and minds of many tourists throughout the year, northern Mongolia is home to the tall mountains of Khangai and Sayan, Khuvsgul lake that shimmers like a border-less blue pearl, the Darkad tsenkher depression (a huge valley of rivers flowing from high mountains), and deer stones.

Eastern Mongolia – A Birthplace of Genghis Khan – “Chinggis did not leave a monument to himself. Temple, pyramid, palace, castle or canal, and even his grave was left unmarked in the remote area where he grew up and hunted as a boy.

Western Mongolia – The rugged beauty of Bayan-Olgii aimag with its pointed mountain points reaching for the sky and vast valleys crisscrossed with meandering streams has always stood out of the western provinces of Mongolia.