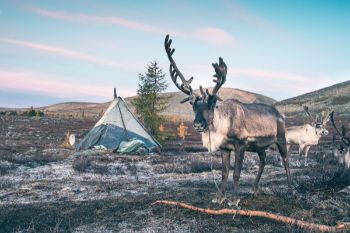 As we Mongolians call ‘Tsaatan’, this endangered ethnic group live deep in the Taiga forest of northern Mongolia. They call themselves as Uighur people, but internationally, their official name is Dukha people, Tuvan Turkic community. They reside around Mongol Shariin Davaa and Shishged River of Khuvsgul province, Mongolia, where they herd their reindeers all year through, moving from pasture to pasture following the good grass. Their population is estimated to be barely 300. Historically, these reindeer herders used to live crossing the border between Mongolia and Tuva Republic back and forth until the Tuva had become part of Soviet Union in 1944 and the border closed shut, leaving the Dukha people inside of Mongolian border. Since then Dukha people in northern Mongolia continued live as reindeer herders, becoming official subjective of the country.

Dukha people used to live mostly on hunting apart from herding their reindeers. However, the most of the surrounding lands started to be protected by state as natural reserves which left them no choice but to herd their reindeers for a living. Reindeers are suited for High Mountain and the forest regions, where it is not too hot. Like their reindeers, Dukha people can endure the harshest and coldest weather, minus 31-50 Celsius degree of winter, living in teepees (we call it ‘urts’ in Mongolian), which is the earliest shelter of hunters and nomads in history. They usually move from one place with neighboring families and settle down in one place as a group. Tsaatan usually settle between 1800-2300m above sea level depending on seasons.

They make every possible dairy product and non-dairy product out of their reindeers. Reindeer milk is famous with its nutrient-rich and emulsion of rich fat. Dukha people use every organ of reindeers for traditional medicine. Reindeer meat is rich with C and D vitamins. This is because reindeers graze on numerous herbs. Skin of reindeer is also used for making clothes as well as for treatment. No waste is here, the same goes for almost all nomads in Mongolia. They ride their reindeers and also use them as pack animals. Because of forest area they don’t use sledges that much.

Dukha people worship nature greatly. It’s because they live so close to the nature and practice Shamanism.

Both their language and culture are endangered as society becomes modernized. They only speak their language in limited environment, that is, family members and relatives because kids have to study Mongolian language at school, which is the reason why their language becoming less used.

Tourism is making Dukha people’s life lot easier, which they can earn amount of money where they can’t find otherwise. But it’s not easy to reach any reindeer family in the Taiga without experiencing hardship of several days trip on horseback. You have to prepare yourself for the difficult trip and it’s not going to become easier after you reach your destination since the way of reindeer family’s life is comparatively harsh.